Well done America - You Voted For What Exactly?

US Election Goes To One Of The 70+ Year Old White Males Used As Front Men For The Real Oligarchs That Run The USA And The World.

By Dark Politricks
The US Election seems to have gone to Joe Biden, the oldest President in US history. He will be 78 in 9 days time on the 20th November. Trump was the previous oldest President at 74.
If you voted and really believe you changed things for the better I hate to dash your optimism but under Biden and the Deep State pulling his strings the US will lurch into more wars in the Middle East, maybe even back Ukraine against Russia, and even ramp things back up in Syria. 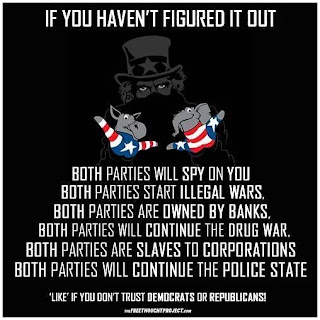 However as Biden was elected and he is pinky finger tight with the Chinese Communist Party I guess the actions Trump implemented against the country for undercutting their wages, stealing jobs, currency manipulation and mass incarceration of political figures will be reversed.
I guess however that due to Biden's own 94 Crime Bill,that he is so proud of that incarcerated millions of poor and coloured people for minor drug offences, whilst letting people like his son off on a freebie. The biggest Prison Population country in the world - the USA, with 660 people in jail per 100,000 will continue.
China isn't even on the list of the countries with the biggest prison population by capita over at www.statista.com. It seems to be the US at the top and then a list of countries in their sphere of influence, if you can narrow that area down at all.
Just forget that he is a senile old man that was talking to crowd members on rallies as if they were dead relatives and that he will probably die in office giving the position of most pretend powerful person in the world to the first woman of colour Kamala Harris. A lawyer who was only too happy to follow Biden's lead by locking millions of Californians up in privatisted prisons, basically slave labour for the big corporations to exploit.
No sign of a mass release from incarceration for all those people in jail for marijuana possession in states that have now legalised it though.
You would have thought that could have been the least they could have done for those suffering on a 3rd strike life sentence for minor drug felonies that lawyers and TV presenters can now smoke in public without fear of arrest.
What did you actually vote for when you put that X next to Biden & Harris's name on your ballot paper?
It certainly wasn't for any of the following:

Well I am sure there are many things not mentioned that are going to occur in the next 4 and maybe 8 years of a senile old racist war mongers stay in office, however long or short it is. However we can be sure that the fat cats in Wall St, the lobbyists from AIPAC and the MIC will be throwing money into politicians pockets to get their way.

Also we are entering uncharted territory now with the Silicon Valley Nexus of influence being able to swing elections one way or another. No it's not by Russian meme's showing Bernie Sanders in LGBT colours but Google, YouTube and Facebook denying people the right to information that would inform them of their decision when voting that swings elections now. The Democrats tried to portray the Biden laptop scandal as a Russian plot, even saying that if true they should still just treat it as if it was a Russia dis-info campaign. How mad is that?

When Google and Facebook can sway an election by using their complex algorithms to only show you one kind of news and discussion about a candidate and YouTube just removes any video that mentions certain people's names or scandals then it's time these companies are broken up. They are a monopoly and when we have massive monopolies like Amazon, with Jeff Bezos getting even richer off the lock-downs across the world, where non essential shops like book stores are closed but they can continue to deliver them by the slave load we are entering the Brave New World we have been warned about for decades. The Great Reset is coming and it may change our lives forever.

COVID19 has already conditioned people to literally beg to be imprisoned then suffer mental health issues from solitary confinement in many cases. Wear a mask or get a fine. Driving in an area not near your home without a good reason, get a fine, dare to ask questions and protest against the draconian measures, get a fine. We are going to come out of this pandemic with hardly anybody using cash anymore as the sheeple have been conditioned over 2020 to use contact-less payments in shops and not notes or coins which "may" transmit the virus.

However do you want to live in a world where the Government knows everything you spend your money on and can remove in the blink of an eye fines from your bank account for breaking speed limits or daring to spend benefit money on alcohol or betting or go even further and implement a Chinese style Social Credit System of control over the population?

I hope you don't but then I hope you knew what you were actually voting for when you made that mark or pressed a button in a voting booth last week. So did you really?