It looks like a new anti Syrian war campaign has been launched online and I urge every serving military member or veteran to support it if they don't believe that their country should be fighting alongside al-Qaeda in Syria.

I have made article after article detailing how we are basically funding, supporting and fighting alongside al-Qaeda rebels from Libya to Syria. It now seems that many serving military feel the same. They don't want to fight alongside the same people the US Government blame for terror attacks against the US people.

Not only is a proven fact that the USA created al-Qaeda to fight the USSR in Afghanistan in the 80's but we have supported them in their terrorist activities in China, Chechnya, Kosovo and most recently gave al-Qaeda linked rebels NATO air support in their overthrow of Col Gaddafi in Libya. Read this for more information on our links with al-Qaeda.

Since the Arab Spring started which is basically a US backed plot to cause de-stabilisation around the Middle East we have witnessed Libya, Tunisia and now Egypt turned into failed states. Syria and then Iran are next on the list.

Al-Qaeda, The Muslim Brotherhood and Islamic extremists like al-Nusra Front aim to, and have succeeded in some cases to control their own areas of the countries they are causing havoc in and in the countries already wiped clean with our help such as Libya and Egypt there is no functioning government to speak of.

The Libyan rebel commanders we supported with tax payers money are even people our Government once claimed were terrorists and some were even locked up in Gitmo such as Abdelhakim Belhaj the founder of the Libyan Islamic Fighting Group. This is the al-Qaeda linked group that ex British MI6 agent, David Shayler and two French reporters with links to ex-president Jacques Chirac claimed the British paid to assassinate Col. Gaddafi in 1996.

Why is it our leaders are so keen to back the heart eating, beheading, child killing nutters that are basically the same people who kill our own soldiers such as the horrible case of Lee Rigby in London?


How strange it is that terrorist are friends one minute then enemies the next. Their status changes so fast it is hard to know whether we are supposed to hate them or support them. Obama would certainly like us to support them in another illegal adventure in Syria.

We know that the CIA and other intelligence agencies maintained close contact with al-Qaeda including Osama bin-Laden right up to 9.11. They even visited him in hospital, and according to Sibel Edmonds the CIA has been using the terrorist group to fight proxy wars around the world just as they did in the 80's with the Soviets.

As I wrote in my recent article "Are we ready to go to war with Russia over Syria" there is plenty of evidence that recent chemical attacks weren't even carried out by the Assad regime as the mainstream propaganda would like us to believe. In fact there is more than enough evidence and credible witnesses who claim it was Syrian rebels who deployed the weapons, either by mistake because they didn't know how to use them, or on purpose to blame on the Syrian regime.

Experts like John Hart, head of the Chemical and Biological Security Project at Stockholm International Peace Research Institute, Gwyn Winfield, editor of CBRNe World magazine, which specialises in chemical weapons issues and even the Israeli paper Haaretz have cast doubts on the claims that the chemical weapons attack was an Assad job.

The fact that the British parliament voted against joining the US in any attack, a first that I know of, and that Russian President Vladimir Putin has called for Obama to present his evidence at the UN is a sign that many outside the axis of war believe there isn't enough evidence to go to war over this. The problem is our war mongering leaders just don't want to listen.


Our politicians are busy holding war cabinets and declaring that there is no other possible explanation for the chemical weapons attack apart from the Assad regime carrying it out yet they know that Syrian rebels have been caught multiple times with Sarin gas in Syria and Turkey.

The mainstream media seems to be very quiet when it comes to evidence that points away from President Assad but even if he did carry out the attack are we really prepared to send our sons and daughters to fight alongside these Islamic nutters?

The mainstream media has been strangely quiet on all the Christians who are being killed, their churches and graveyards destroyed and the peril they will be in if we allow Islamic extremists to take over these countries.

President Assad may be a dictator, but Christians and Muslims have lived side by side in Syria for hundreds of years. The problem is he is not "our dictator" and the chemical weapons he supposedly used were not authorised by us. Not like during the Iraq / Iran war in which we didn't kick up too much of a fuss when Saddam Hussein gassed thousands of Iranians with our knowledge.

We are now considering backing these various groups of Islamic extremists in Syria.

Both the al-Nusra Front and al-Qaeda rebels are fighting President Assad in their civil war and they want to establish an Islamic al-Qaeda state if successful. Do you really think they will be grateful for our support or are they just using us for their own ends. Do you really see them handing over any weapons that fall into their hands from NATO supplies after any war is over? They sure didn't in Libya.

So if there is a campaign starting online I am all behind it. I hope as many soldiers from countries planning on fighting join it as possible.

Why the fuck would any US or NATO soldier for that matter want to fight on the same side as al-Qaeda. Weren't they the whole reason this war on terror was started in the first place?

Anyone who knows anything realises the CIA control these rebels and they are used as the perfect patsies to de-stabilise countries so that we can enter on white horses as saviours to humanity. The sad thing is that we are no such thing, we are moral relativists who have no ethical boundaries when it comes to war. If there is money to be made or oil to be drilled then that is all the excuse we need.

I just hope this campaign catches on. Hashtags #IdidntJoin and #NoSyriaWar seem to be the ones to use when posting your own "I didn't join the military to fight alongside al-Qaeda" photos on Twitter.

Here are just a few of the photos from the #IdidntJoin campaign. 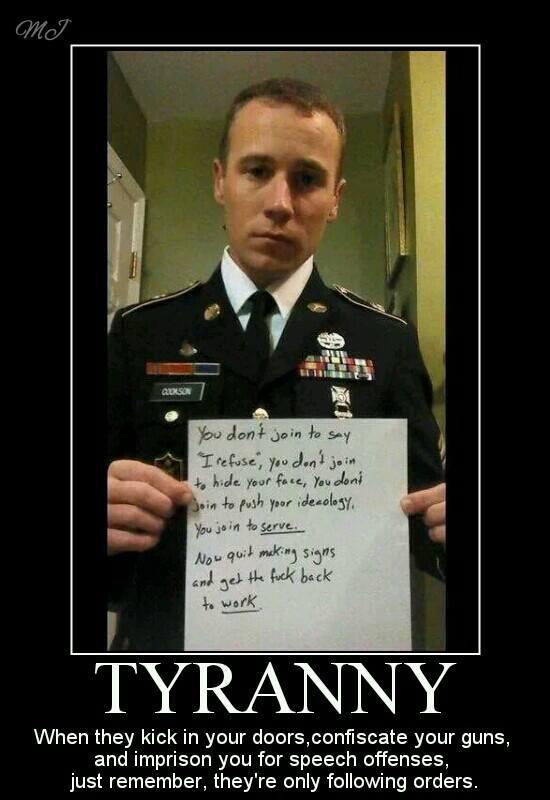 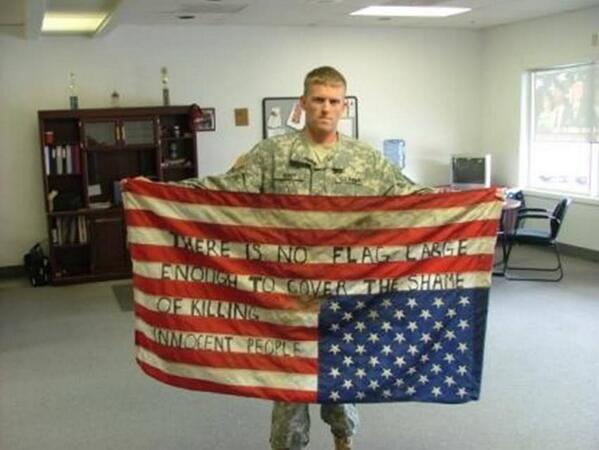 Posted by Dark Politricks at 15:22