What would the USA do if they were the Ukraine and Russians were stirring up trouble in their country?

What would the USA do if they were the Ukraine and Russians were stirring up trouble in their country?

Can you imagine if what was occurring in the Ukraine was happening in the USA or the UK?

Policeman killed by ultra nationalists and anti-Semite thugs being put into positions of power with the help of AIPAC bought and paid for US politicians such as John McCain?

It just goes to show how the US and Europe doesn't give a shit about using nationalist thugs and anti-semites to carry out their agenda when it means they can ebb away at Russian borders. However at home, if you dare criticise Israel you are called an anti-semite - square than one if you please?

What right does a US politician have to enter another country and demand changes in leadership? Can you imagine if Russian politicians turned up in Washington or London and stood with the BNP or Klu Klux Klan and demanded that the constitutionally elected President of the country stood down so that ultra nationalist thugs could take their place?

Here is one of the thugs John McCain and EU leaders want to put into positions of power threatening officials in their offices. Aleksandr Muzychko a radical Ukrainian nationalist leader lashed out at a local prosecutor with obscene language, punches and threats claiming the prosecutors were “sabotaging” their job.

“Shut the f**k up, you b*tch! Your f**king time is over,” he uttered, threatening to rope the clerk like a dog and lead him to the people on Maidan.


This “activist,” is an ex Chechen fighter who fought against Russian troops and recently branded his Kalashnikov in front of regional authorities goading them and threatening them to "try to take it away from me".


He is also on record for making openly anti-Semitic statements as are many of the far right "protestors" who have been killing and beating policeman, shooting at politicians and rioting on a daily basis for months now.

Here are just a few photos of "demonstrators" attacking the Ukraine police.

If the US can pinch the noses of peaceful students sitting on the ground to spray pepper spray down their throats, then can can you imagine the response of US police if protesters sprayed pepper spray at THEM, or battered them as they are doing in the Ukraine by Occupy or Tea Party protesters?

They would have been shot on the spot. 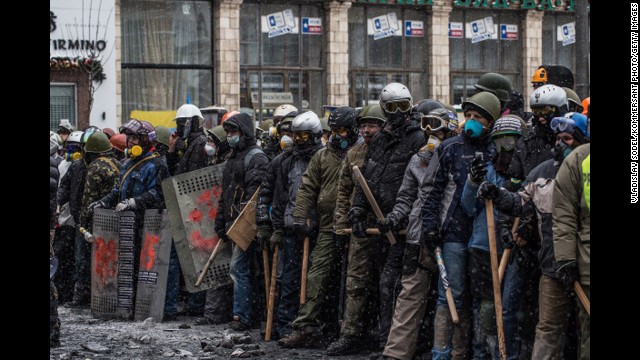 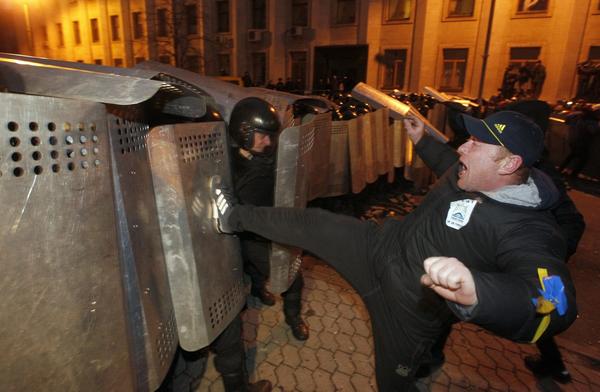 Now I am not saying that the Ukrainian president who is on the run and has just given a press conference on RT.com is perfect.

He banned protests and allowed policemen to kill many of the protesters. However the people who the west is trying to put into power so that they can milk their assets and drain them through IMF loans are no better.

This whole scheme has been devised to split Ukraine from Russia who would offer them a much better deal than the EU is offering and get them into the western sphere of influence and most importantly NATO. This was something that explicitly stated would NOT happen when Gorbachev and Reagan had their meetings and the Soviet Union split up.

The west promised not to encroach on Russian areas of influence but this has blatantly been broken as the USA realised they were the only super power and believed they could do as they pleased despite previous agreements.

First Georgia became a US proxy after a "colour" revolution, and with US/Israeli help tested the Russian military when they killed peace keepers and bombed the breakaway territory of South Ossetia during the start of the Chinese Olympics in 2008. However Russia proved the west wrong and humiliated them in this illegal war and now half of South Ossetia is under Russian control.

The West then moved into the southern states of Russia, building air bases, using their proxy Islamic terrorists to stir up trouble and then invading Afghanistan to get even more air bases, surrounding Russia, plus the plan of an oil pipeline to rival the Russian one bringing gas and oil to Europe and ports in the south.

It just amazes me that people like Catherine Ashton (EU) and John McCain, who are against nationalism at home are prepared to enter a sovereign country, talk to neo-nazis (people they would never talk to at home), and stir up trouble in a country they have no business being in.

If I was Putin, I would invade Ukraine right now, at least the eastern half and Crimea who wants to stay connected to Russia, and then see what balls the NATO agitators really have.

I cannot believe the US or Europe want to cause shit with Russia when they need their help with Syria and Iran so I doubt they would do anything if that happened apart from make loud noises and thump their chests.

However Putin can see his country being surrounded by the west (NATO) and from a historical perspective (watch Oliver Stones untold history of the United States) if you want some context. The Russians are paranoid to the extreme about being invaded due to being attacked so many times in the past.

Remember whilst the UK and US lost less than a million men in World War II, Russia lost over 20 million! Whatever you are taught in school about World War II, the US/UK did not win the war in Europe, Russia did. They beat us to Berlin and they destroyed the majority of the German army.

Also they were invaded by the Germans twice in the 20th century (World War I and II) and before that by Napoleon.

There is a saying in Russia, "give a German a gun and before long they will turn it at Russia". If you don't know your history then you should note that when Germany invaded the Ukraine in WWII, many Ukrainians treated them as liberators and even joined their ranks to fight the Soviets.

Therefore the neo-nazi element in the Ukraine has been around for a long time and Russia has a right to fear it.

If the west is so keen to allow neo-nazis to take power in a state that they want to join NATO and the EU then we must ask ourselves, are we becoming a fascist empire or do we just have no morals when it comes to taking over countries by any means necessary.

For more info read about Gladio 2 (Sibel Edmonds) and how the US used nationalists to other throw regimes in the 80's and 90's and then changed to Islamic extremists when it suited them (al-Qaeda, al-Nusra Front etc).

This is the first part of the 5 part series with James Corbett. For the others go to this youtube.com link.


View the original article Can you imagine if Ukraine was the USA? at darkpolitriks.com
Posted by Dark Politricks at 07:35