As I have been saying for ages in my musings about Libya and our flip flopping links with terrorists including these two recent articles:

When does the enemy of our enemy stay our friend?

NATO helps install Jihadists and Terrorists in control of Libya.

M16 was involved in the rendetion and torture of one of the top leaders in the new Libyan terrorist government that NATO helped to install.

Abdel Hakim Belhaj, a confirmed Libyan jihadist with links to al-Qaeda and who is currently a top military  commander in the new Libyan government is  suing both the MI6 and the British government, accusing them of complicity in his illegal rendition and alleged torture at their behest.

For those people who haven't heard of the type of people who we as "humanitarians" helped other-throw Gaddafi for. Abdel Hakim Belhaj is the founder of the Libyan Islamic Fighting Group (LIFG).

After the Taliban took power in Kabul in 1996, the LIFG kept two training camps in Afghanistan; one of them, 30 kilometers north of Kabul – run by Abu Yahya – which was strictly for al-Qaeda-linked jihadis.

After 9/11, Abdel Belhaj moved to Pakistan and also to Iraq, where he befriended none other than hardcore terrorist and al-Qaeda beheading expert in Iraq Abu Musab al-Zarqawi.

So Abdel Belhaj was not only a follower of bin Laden. He was also a well known jihadist in his own rights and the leader of an outlawed terrorist group in Libya. One in which the ex M15 agent David Shayler says the British secret service paid to carry out a botched execution attempt on Gaddaffi back in the 90's.

Then in 2003 Abdel Belhaj was arrested and taken extraordinary rendition-style, to a secret Bangkok prison, and duly tortured by the Americans.

Then in In 2004, the USA decided to send him as a gift to Libyan intelligence until he was freed by Saif Islam al-Gaddafi in March of 2010, along with other 211 terrorists.

Before being set free Abdel Belhaj and the other terrorists had to sign a 417-page confession in which they declared the jihad against Gaddafi illegal and finally over. Then I guess he just melted away until he became useful again to the globalists when they decided to other-throw the once foe, then friend again Col Gaddafi.

So as the BBC is now reporting finally (months later than the alternative media #altnews) this rebel leader is now suing us for our actions before he became our ally and the top commander of our now free and liberal Libya.

A kind and loving place where women can walk with their heads held high without fear of rape, and all men are treated equal whether they be homosexual, Christian or Jew.

A place where our western human rights have been imported and taken on-board wholeheartedly, and a place any European or American would now willingly love to holiday to or maybe relocate for life - of course I kid. The place is a mess (we created) full of tribal infighting and hate seen only a few weeks ago when a World War II cemetery was destroyed by Libyan rebels.

Gaddafi may have been evil but I guess a lot of these people are just as evil and as Libya is now a tribal mess of revenge, death, rape and summary executions of anyone blacker than light brown.

It seems we have created the potential for more than a little blowback down the years. How that blowback bites us in the ass we shall have to wait and see but the new Libya is already sending fighters to Syria to fight Assad, another al-Qaeda backed war we seem to be on the same side with.

From the BBC News website today and reported on it's news channels - only a few months later than reported on sites like this and others. 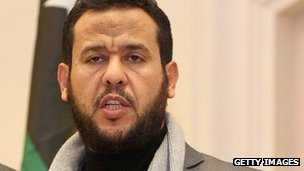 The UK government approved the 2004 rendition of a terror suspect to the Gaddafi regime, the BBC can reveal.

A letter from an MI6 officer refers to Abdel Hakim Belhaj's rendition to Libya. It congratulates the Libyans on the "safe arrival" of the "air cargo".

Mr Belhaj says he was tortured in jail. Successive UK governments have denied complicity in rendition or torture.

However it is not clear at what level of government the decision was authorised.

The letter from the senior MI6 officer, Sir Mark Allen, to Col Gaddafi's intelligence chief, Musa Kusa, was found last year in the rubble of Musa Kusa's headquarters, which were bombed by Nato.

As well as congratulating the Libyans on the arrival of the "cargo", it points out that "the intelligence was British".

The letter was sent in 2004 when Mr Belhaj was the leader of the Libyan Islamic Fighting Group.

MI5 believed the group was close to al-Qaeda and involved in recruiting young Muslims in Britain to fight in Iraq.


Our correspondent says it appears MI6 had discovered that Mr Belhaj was in Malaysia and about to head for London in the hope of obtaining political asylum.
MI6 informed its foreign intelligence partners, and as a result Mr Belhaj was intercepted in Bangkok, presumably by the CIA, and rendered to Libya.

Our correspondent says the letter suggests MI6 was complicit in Mr Belhaj's illegal rendition and alleged torture in Libya - but that MI6 was not acting unilaterally.

He says his understanding is that MI6 obtained authorisation from the Labour government of the time for its action.

Jack Straw was the Labour Foreign Secretary in 2004 when the rendition took place. In an interview on BBC Radio 4 last year he said:


"No foreign secretary can know all the details of what its intelligence agencies are doing at any one time."

His office told the BBC Mr Straw had nothing further to add in the light of the current allegations.

Mr Belhaj - now a senior military commander in the new Libya that Britain helped create - is suing MI6 and the British government, accusing them of complicity in his illegal rendition and alleged torture.

He says he believes he was rendered from Bangkok to Libya by the CIA.

The Metropolitan Police is also investigating his allegations.

Mr Belhaj worked with Nato as one of the leaders of the forces that helped overthrow Col Muammar Gaddafi.

But he claims that during his more than four years in prison he was interrogated by agents from countries including the UK and US.

He had been living in exile in Beijing after leading opposition to Col Gaddafi.

In 2010, Prime Minister David Cameron established a Detainee Inquiry into "whether Britain was implicated in the improper treatment of detainees, held by other countries, that may have occurred in the aftermath of 9/11".

However, the inquiry was mothballed in January 2012 after the Metropolitan Police announced it was investigating Mr Belhaj's claims.

Justice Secretary Ken Clarke said the government was committed to holding a judge-led inquiry once these were investigated.