This article has been taken from the BBC Website and I am reproducing it here, as it was from my old site and the article was not copied across when I moved here. So I used the Wayback Machine to get a copy. I did this in case the original ever disappears so that there is record of an “official”  news establishment admitting that such an all invasive privacy destroying system exists and has done so for quite a while.
By Andrew Bomford of BBC Radio 4′s PM programme 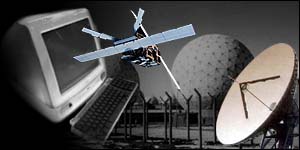 Imagine a global spying network that can eavesdrop on every single phone call, fax or e-mail, anywhere on the planet.
It sounds like science fiction, but it’s true.
Two of the chief protagonists – Britain and America – officially deny its existence. But the BBC has confirmation from the Australian Government that such a network really does exist and politicians on both sides of the Atlantic are calling for an inquiry.
On the North Yorkshire moors above Harrogate they can be seen for miles, but still they are shrouded in secrecy. Around 30 giant golf balls, known as radomes, rise from the US military base at Menwith Hill.
Linked to the NSA
Inside is the world’s most sophisticated eavesdropping technology, capable of listening-in to satellites high above the earth.
The base is linked directly to the headquarters of the US National Security Agency (NSA) at Fort Mead in Maryland, and it is also linked to a series of other listening posts scattered across the world, like Britain’s own GCHQ.
The power of the network, codenamed Echelon, is astounding.
Every international telephone call, fax, e-mail, or radio transmission can be listened to by powerful computers capable of voice recognition. They home in on a long list of key words, or patterns of messages. They are looking for evidence of international crime, like terrorism.
Open Oz
The network is so secret that the British and American Governments refuse to admit that Echelon even exists. But another ally, Australia, has decided not to be so coy.
The man who oversees Australia’s security services, Inspector General of Intelligence and Security Bill Blick, has confirmed to the BBC that their Defence Signals Directorate (DSD) does form part of the network.

“As you would expect there are a large amount of radio communications floating around in the atmosphere, and agencies such as DSD collect those communications in the interests of their national security”, he said.

Asked if they are then passed on to countries like Britain and America, he said: “They might be in certain circumstances.”
But the system is so widespread all sorts of private communications, often of a sensitive commercial nature, are hoovered up and analysed.
Journalist Duncan Campbell has spent much of his life investigating Echelon. In a report commissioned by the European Parliament he produced evidence that the NSA snooped on phone calls from a French firm bidding for a contract in Brazil. They passed the information on to an American competitor, which won the contract.

“There’s no safeguards, no remedies, ” he said, “There’s nowhere you can go to say that they’ve been snooping on your international communications. Its a totally lawless world.”

Breaking the silence
Both Britain and America deny allegations like this, though they refuse to comment further. But one former US army intelligence officer has broken the code of silence.
Colonel Dan Smith told the BBC that while this is feasible, it is not official policy:

“Technically they can scoop all this information up, sort through it, and find what it is that might be asked for,” he said. “But there is no policy to do this specifically in response to a particular company’s interests.”

Legislators on both sides of the Atlantic are beginning to sit up and take notice. Republican Congressman Bob Barr has persuaded congress to open hearings into these and other allegations.
In December he is coming to Britain to raise awareness of the issue. In an interview with the BBC he accused the NSA of conducting a broad “dragnet” of communications, and “invading the privacy of American citizens.”
He is joined in his concerns by a small number of politicians In Britain. Liberal Democrat MP Norman Baker has tabled a series of questions about Menwith Hill, but has been met with a wall of silence.

The original article on the BBC news site has actually been removed but you can still find a copy on the Wayback Machine Archive. I wouldn't be surprised if that site is removed soon due to "Cancel Culture", when people want all their Internet History "Scrubbed" from the web this is one site that they ask to have archived content remove from.
Here is a direct link to it > news.bbc.co.uk.

Posted by Dark Politricks at 19:07