TheGrayZone Breaks A Story Which Should Be All Over The MSM

By Dark Politricks
"Reuters, BBC, and Bellingcat participated in covert UK Foreign Office-funded programs to “weaken Russia,” leaked docs reveal"
Max Blumenthal, writes for the thegrayzone.com an explosive piece about the UK/US hypocrisy when it comes to blaming Russia for hacking and interference in elections. All whilst doing the exact same thing to Russia. They are doing this by using major news outlets such as the BBC and Reuters to train up 1000's of YouTuber's, Bloggers and news reporters to push pro NATO propaganda into Russian areas of influence.
"New leaked documents show Reuters’ and the BBC’s involvement in covert UK FCO programs to effect “attitudinal change” and “weaken the Russian state’s influence,” alongside Intel contractors and Bellingcat."
"The UK Foreign and Commonwealth Office (FCO) have sponsored Reuters and the BBC to conduct a series of covert programs aimed at promoting regime change inside Russia and undermining its government across Eastern Europe and Central Asia, according to a series of leaked documents.
The leaked materials show the Thomson Reuters Foundation and BBC Media Action participating in a covert information warfare campaign aimed at countering Russia. Working through a shadowy department within the UK FCO known as the Counter Disinformation & Media Development (CDMD), the media organizations operated alongside a collection of intelligence contractors in a secret entity known simply as “the Consortium.”
Through training programs of Russian journalists overseen by Reuters, the British Foreign Office sought to produce an “attitudinal change in the participants,” promoting a “positive impact” on their “perception of the UK.”
“These revelations show that when MPs were railing about Russia, British agents were using the BBC and Reuters to deploy precisely the same tactics that politicians and media commentators were accusing Russia of using,” Chris Williamson, a former UK Labour MP who attempted to apply public scrutiny to the CDMD’s covert activities and was stonewalled on national security grounds, told The Grayzone.
“The BBC and Reuters portray themselves as an unimpeachable, impartial, and authoritative source of world news,” Williamson continued, “but both are now hugely compromised by these disclosures. Double standards like this just bring establishment politicians and corporate media hacks into further disrepute.”
Thomson Reuters Foundation spokesperson Jenny Vereker implicitly confirmed the authenticity of the leaked documents in an emailed response to questions from The Grayzone.
However, she contended, “The inference that the Thomson Reuters Foundation was engaged in ‘secret activities’ is inaccurate and misrepresents our work in the public interest. We have for decades openly supported a free press and have worked to help journalists globally to develop the skills needed to report with independence.”
The tranche of leaked files closely resemble UK FCO-related documented released between 2018 and 2020 by a hacking collective calling itself Anonymous. The same source has claimed credit for obtaining the latest round of documents."
They first tweeted out a link to the article last week but then someone in the UK foreign office must have got worried as they managed to get Twitter to put a new tag on their post that the documents in the article may have been obtained by hacking. 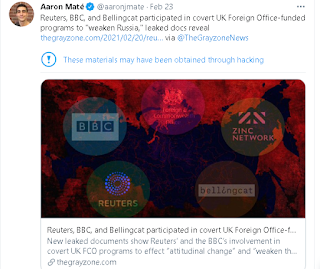 This of course only made the Tweet go viral, with Bellingcat trending at one point, and meme after meme followed it up on Social Media, most half baked gamer irrelevant meme's, but still, it got the article noticed.
Now we must all be wondering who the hundreds of YouTube channels and bloggers are who are being paid by the UK Gov to push pro NATO propaganda into Russian areas are. They obviously don't want to be ousted but it will be interesting to see which #altnews outfits comment on this piece in a pro or negative way or just ignore it all together, which I suspect will be the case as I haven't seen any UK News Station report on this breaking story yet in anyway or form, even negatively e.g "Anonymous Hacks Government Reports", with no actual details of the underlying nature of the information hacked..
As Max said on a YouTube video earlier, if the Grayzone had been caught doing the same thing but in the opposite direction, e.g pushing pro-Russian propaganda in the US or UK, it would be all over the nightly news, they would be jailed, hell storms would be generated and even the possibility of real war.
We are already in a proxy war with Russia in the Ukraine, and there is no doubt that the Axis of War is engaged in a new cold war with the remnants of the old Soviet Union, that they bankrupted and stole from when it crumbled in on itself in the 90's, and instead of NATO and Russia facing off and causing a nuclear holocaust, there will be more proxy wars. Just like the one in the Donbass region of eastern Ukraine, especially now that Biden and the Obama/Clinton neo-lib crew, are back in office.
Biden has already started bombing Syria, a country they are stealing oil from, along with Iraq, and despite being asked by those governments to leave their oil and their countries alone, they have just pushed more NATO troops towards the Middle East.
Biden is more interested in getting to war quickly, bombing Syria, and calling it a defensive measure despite not really knowing who it really was who killed the American contractor in northern Iraq that the response was in retaliation for.
They blame Iran of course, and want to start a war with them, however Iran have been truly fighting ISIL in Syria and have been invited to do so, along with Russia, who would have finished the job if it wasn't for Western AXIS of WAR meddling powers protecting Idlib, and the remaining ISIL terrorists they have funded, armed and backed in their war against Assad. The civil war in Syria would now be over.
It seems like whenever the US can make a war that can be ended quickly extend on for years, even decades, they will, all to the benefit of the lobbyists for Raytheon and other DOD revolving door MIC leaders.
I am just hoping to see some mention of this MI6 / Bellingcat / Reuters / BBC intelligence move to destabilise Russia in our own news but then we all know from Jon Snow's autobiography that to work for the BBC you have to become an MI6 snitch, push pro establishment stories, ignore anything to do with Israel massacring Palestinians at the border and in return they collect a double salary tax free.
From a CH4 article on Spy College, Secret Agent Recruiting Hotspots:

In his autobiography Shooting History, Channel 4 News anchor-man Jon Snow revealed that, in the 1970s, he was approached to spy on "left-wing people" working in television.
He recalls the experience today: "I was contacted [by letter] in between working for LBC and ITN to spy. They wanted me to work for MI6."
Snow then attended a meeting in Whitehall where he was offered a tax-free salary in return for his services.
He adds: "It was suggested I should read the Denning report into the Profumo affair. I never did and instead I read Kim Philby's My Secret War. It was clear from the book that to be a good spy you would have to be a double-agent."

It really does make listening to our establishment and oh so trust worthy BBC more interesting now, to know they are mostly MI5/6 agents, and involved in a massive scandal that should be world wide news.
I am not saying Russia does not hack the US or UK, but for us to claim the moral high ground and pretend we are not doing the exact same thing is just ridiculous and makes us hypocrites.
China, Russia, US, Israel, UK and India are all hacking each other for industrial secrets, an edge on our competitors, some sort of info that will give us a leg up after a massive economic collapse. It happens all the time, but for the BBC to be ousted like this, and then try to get Twitter to deter people from reading the report by putting up a special "These materials may have been obtained by hacking" sign on the Tweet which only made it go viral is really hypocritical.
Listen to Max Blumenthal talk to Aaron Maté about the controversy in this video, I am sure it will be taken down soon, so check on Bitchute.com if it goes down. I just did but couldn't find the video. It said showing 17 from 18 videos, but wouldn't let me see the 18th, so I don't know if they are hiding the relevant video for some reason or not but I just cannot get that 18th video to show up. Maybe someone else knows why it isn't there?
Watch it on YouTube for now.
Read the whole article here > https://thegrayzone.com/2021/02/20/reuters-bbc-uk-foreign-office-russian-media/
By Dark Politricks
© 2021 Dark Politricks
at 18:31
Email ThisBlogThis!Share to TwitterShare to FacebookShare to Pinterest
Labels: Axis of War, BBC, Bellingcat, Jon Snow, Max Blumenthal, MI6, Propaganda, Raytheon, Reuters, Russia, Spying, TheGrayZone