The CIA - 70 years of coups, assassinations and false flag operations

Washington Bullets: A History of the CIA, Coups, and Assassinations

By Dark Politricks
This is from a French site so if you are going to view it there, you may want to translate it to your language to make it readable if you don't speak French. Sorry if this is badly translated but it is worth it. The full article link is here to the original source material > www.les-crises.fr
The targets of Washington's bullets were the leaders who attempted to assert their nation's economic sovereignty, writes Jeremy Kuzmarov in this review of a new book by Vijay Prashad.
70 years of CIA coups, assassinations, "false flags".
Review of Vijay Prashad's book, Washington Bullets: A History of the CIA, Coups, and Assassinations, with a preface by Evo Morales (New York: Monthly Review Press, 2020).
Source: Consortium News, Jeremy Kusmarov 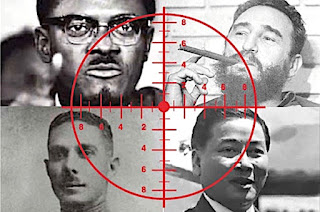 Washington bullets targets. Top left: Congolese leader Patrice Lumumba; top right, Cuban leader Fidel Castro; Rafael Trujillo of the Dominican Republic, bottom left, and bottom right, South Vietnamese Prime Minister Ngo Dinh Diem (boingboing.net)
At his induction hearing in February, the most recent CIA Director, William J. Burns, continued the Agency's long tradition of highlighting the threat posed by Russia and China, as well as North Korea, and said Iran should not be allowed to acquire nuclear weapons.
Vijay Prashad's new book, Washington Bullets: A History of the CIA, Coups, and Assassinations, details how fabricated foreign threats have historically been used by the Agency to wage a war against the Third World - to expand the dominance of American companies.
In his preface, Evo Morales Ayma, the former president of Bolivia who was deposed in a U.S.-backed coup in 2019, writes that Prashad's book is devoted to "the bullets that assassinated democratic processes, which have assassinated revolutions and which have assassinated hope." 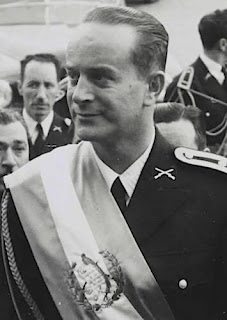 Jacobo Arbenz (Gobierno de Guatemala, Fotos antiguas de Guatemala. Public domain.)
Prashad is a leading political analyst, author of major studies on imperial interventions, corporate capitalism, and political movements in the Third World.
His latest book synthesizes the wealth of his knowledge. It contains personal revelations from former CIA agents, such as the late Charles Cogan, head of the Near East and South Asia division within the CIA's directorate of operations (1979-1984), who told Prashad that in Afghanistan, the CIA had "from the start funded the worst guys, long before the Iranian revolution and long before the Soviet invasion."
Washington Bullets begins in Guatemala with the 1954 coup that overthrew Jacobo Arbenz, whose moderate program of land reform threatened the interests of the United Fruit Company.
The law firm of US Secretary of State John Foster Dulles, Sullivan & Cromwell, had represented United Fruit, and Dulles and his brother, Allen, the head of the CIA (1953-1961), were large shareholders.
Former CIA Director Walter Bedell Smith became President of United Fruit following Arbenz's impeachment, and President Dwight Eisenhower's personal secretary Ann Whitman was the wife of United Fruit's advertising director, Edmund Whitman.
After the coup, Arbenz's successor Castillo Armas said that “if it is necessary to turn the country into a cemetery in order to pacify it, I will not hesitate to do so."
The CIA contributed to this bloodbath by providing Armas with lists of Communists and by giving him his assassination protocol.
This protocol was then applied in operations directed against third world nationalists such as Patrice Lumumba in Congo (1961), Mehdi Ben Barka in Morocco (1965), Che Guevara (1967) and Thomas Sankara in Burkina Faso (1987) .
Sankara was killed as part of a conspiracy carried out in close coordination between a CIA agent at the United States Embassy in Burkina Faso and the French secret service, the SDECE.
According to Prashad, while “many of the assassins' bullets were fired by people with their own steeples, paltry rivalries, and insignificant gains, more often than not they were signed Washington bullets."
Their main objective, he said, was "to stop the tidal wave that had been sweeping since the October Revolution of 1917 and the many waves that have swept the world to form the anti-colonial movement."
Prashad, as these comments indicate, roots the crimes of the CIA in the larger history of colonialism and the hostility of the world's capitalist elites to the emancipation of the working class brought about by the Russian Revolution.
Imperialism, he reminds us, is the attempt to "subdue people to maximize the theft of resources, labour and wealth."
The targets of Washington's bullets, in turn, have been those who, like Sankara and many others, have tried to assert their nation's economic sovereignty.
The CIA's pattern of behaviour was established in the aftermath of World War II, when it supported political factions in Europe that had collaborated with the Nazis against the Communists, who in turn led the resistance against Nazism.
The agency's work, as Prashad writes, has helped "bring back to life the corpse of the reactionary European political bloc."
In Japan, this meant the creation of a new party (the Liberal Democratic Party - LDP) to defeat the socialists, a party that absorbed old fascists (Ichiro Hatoyama and Nobusuke Kishi) and developed lasting ties with big business and organized crime (Yoshio Kodama).
In 1953, the CIA succeeded in overthrowing the democratically elected Prime Minister of Iran, Mohammed Mossadegh, who had set out to nationalize the country's oil industry.
From 1960 to 1965, the agency attempted to assassinate Cuban revolutionary leader Fidel Castro on at least eight occasions by sending out mafia gangsters who attempted to use poison pills, poisoned pens, a poisoned cigar, a spacesuit containing tuberculosis, botulinum toxin and other deadly bacterial powders. In total, there were 638 assassination attempts - all of them were unsuccessful.
The CIA also orchestrated a coup d'état in South Vietnam in 1963 against the Diem brothers when they sought to draw closer to the National Liberation Front (FLN), a leftist party. 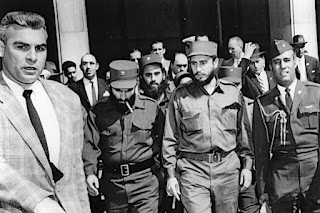 April 1959: Security Bureau (SY) Special Agent Leo Crampsey, left, escorts new Cuban Prime Minister Fidel Castro (center) on a visit to Washington, DC, shortly after the January Revolution in Cuba (US Department of State).
Another coup was carried out against the Indonesian socialist government of Achmed Sukarno, whose ouster in 1965 sparked an anti-Communist bloodbath.
The Indonesian coup of 1965 - like its predecessors in Guatemala and Iran and the one that followed it in Chile - followed a modus operandi with nine different stages:
Perfected and refined over the years, almost all of these steps were most recently implemented in Maidan's 2014 coup in Ukraine, and the right-wing coup against Evo Morales in Bolivia in 2019.

The memorandum which describes the organization by the CIA of the deposition of President Jacobo Árbenz in June 1954 by the paramilitaries. (US Central Intelligence Agency Public domain).
Regarding the economy, Prashad unearthed a CIA study from the early 1950s on how to jeopardize the coffee industry in Guatemala in order to undermine the Arbenz government.
It was a precursor to the Nixon administration's better-known campaign to "make Chile's economy roar" after Chileans had the audacity to elect a socialist, Salvador Allende, who nationalized the copper industry (this industry was controlled by two American companies, Kennecott and Anaconda, which lobbied for a coup).
The chief of the CIA station at the time of the 1973 coup in Chile, which brought fascist General Augusto Pinochet to power, was Henry Hecksher.
He had worked undercover as a coffee buyer in Guatemala at the time of the Arbenz coup and had bribed Colonel Hernán Monzon Aguirre who became the head of the junta that replaced Arbenz.
After being promoted, Hecksher went on to lead CIA subversion operations in Laos and Indonesia in the late 1950s and early 1960s, before leading a project against the Cuban revolution in Mexico.
Hecksher was the counterpart of sinister figures such as Lincoln Gordon - a ruthless anti-Communist who helped orchestrate the 1964 coup in Brazil - Marshall Green, who helped spark the 1965 coup in Indonesia, as well as as CIA agent Kermit Roosevelt and State Department agent Loy Henderson, who helped bring the coup against Mossadegh to fruition.
The United States Embassy played such a direct role in the coups d'état in so many countries that a popular Cold War joke was heard: "Why is there never a coup d'etat in the United States? Because there is no American embassy there."
One of the tricks of the trade was to recruit union activists capable of flushing out the Communists to get rid of them and of organizing strikes against leftist governments in order to facilitate their downfall.
“Anything was acceptable,” writes Prashad, “to undermine the class struggle, both in Europe and in the states that were breaking free from colonial rule. "
Prashad's attention to class divisions offers a refreshing antidote to liberal CIA stories - like Tim Weiner's book, Legacy of Ashes - which present good information but fail to analyse what motivated the activity. misguided agency.
Read the full article (In French) at > www.les-crises.fr
By Dark Politricks
© 2021 Dark Politricks
Posted by Dark Politricks at 20:18