Why Mainstream Media Is Failing

The Orwellian World Of Mainstream Media

It truly is an Orwellian world we are living in when people who attack the Democrats from the left are being called Right Wing, and NAZI's by supposed left wing personalities like Sam Seder and Cenk Uygur from the Young Turks, someone who has been in an online war recently with Aaron Mate, Glenn Greenwald, and Jimmy Dore, about the staged Douma Gas Attacks in Syria.
When real left wing journalists and personalities like Glenn Greenwald have to go to FOX News and the Tucker Carlson show to be heard then you know that we are now living in a world where black is white and the "liberal" establishment is censoring real progressive views, along with any news that attacks the Empire.
Here is a left wing comedian, who attacks the Democrats from the left. If people like Jimmy Dore have to go onto a right wing channel like FOX just to get their message across to millions of people, and actually manages to convince Tucker live on air, that Julian Assange should be pardoned. Then you know that the "left" wing channels like MSNBC no longer contain true left wing news shows.
Here is another left wing journalist, Glenn Greenwald, who is appearing on Tucker Carlson's show, to talk about how the defence budget is being spent 'spying on American citizens'. Tucker has just realised after NSA denials that he was a target of NSA spying due to his show trying to organise an interview with Russian Premier, Vladimir Putin.
Although at first people claimed he was crazy to think that the NSA would be spying on an American citizen, despite everything we know they do from Edward Snowden and Thomas Drake, he has actually confirmed that the National Security Agency did indeed monitor his private communications. It was confirmed by the Fox News host from a whistle-blower.

“Tucker Carlson was talking to U.S.-based Kremlin intermediaries about setting up an interview with Vladimir Putin shortly before the Fox News host accused the National Security Agency of spying on him,” sources told Axios.

Read more about that story here > NSA confirms Tucker Carlson was being spied on.
Of course these left wing commentators, get labelled as "Right Wing", due to appearing on Tucker Carlson's show. However it seems to be the only place that will actually accept left wing guests anymore. MSNBC won't have them on to discuss the failings of the Joe Biden presidency and the American Empires foreign policy.
Therefore where are these people supposed to go to get their message over to a larger audience than those who watch their YouTube channels?
If supposed left wing channels won't have these people on to discuss left wing points of view because they are now all pro-Biden, pro-war, anti-Russia, and anti-free speech, then supposed "American Liberal's" are in trouble if they are being brainwashed by Rachel Maddow and her conspiracies about #Russiagate.
Even in a court case recently her lawyer argued successfully that her audience knows she does not deliver "real news", but puts her own "slant" on it, and rants and raves about wild political conspiracy theories that Russia is under everyone's bed, because her watching viewers already "know" she is just being hyperbolic. However do they really know that she is not delivering real news but just her own political views that are slanted by her political beliefs like #Russiagate?
You can read the page from the Judges dismissal of a case where she called out someone for being a Russian spy here. 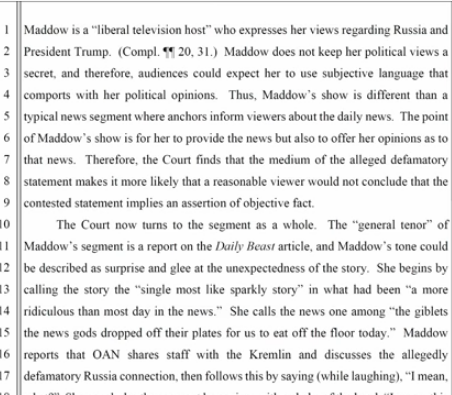 Please read the central part carefully where it states and I repeat:

"Thus Maddow's show is different than a typical news segment where anchors inform viewers about the daily news. The point of Maddow's show is for her to provide the news but also to offer her opinions as to that news. Therefore the Court finds that the medium of the alleged defamatory statement makes it more likely that a reasonable viewer would not conclude that the contested statement implies an assertion of objective fact."

Therefore people watching Rachel Maddow, who believe her every word, have no basis to do so, in this judges view. She is a story teller NOT a news anchor. No wonder people trying to tell the world some real news have trouble finding a prime time spot to do so.
One of the most important pieces of news since the lies that led us into a failed illegal war in Iraq, has been the debunking of Syrian involvement in a chemical weapons attack, that ensured that they were then bombed by the Axis of War. The USA, UK and France.
The OPCW -  The Organisation for the Prohibition of Chemical Weapons, and their cover up of the supposed Syrian gas attack in Douma, which has seen 4 of the inspectors now claiming that the published report was doctored, and in fact, there was no evidence that the Syrian army had dropped chemical weapons in barrels from the air into the suburb of Damascus, an area controlled by anti-Assad, and Western Proxy backed jihadist's for a long time.
A leaked OPCW assessment challenges the claim that the Syrian government carried out a chemical weapons attack in Douma in April 2018. The award winning scientist and MIT professor Emeritus Theodore Postol says the report shows the gas attack was "staged," and undermines the case for the US strikes that followed, in total 4 inspectors have now come forward to air serious concerns about the chemical watchdog’s Douma probe.
However the OPCW Director General Fernando Arias has doggedly refused to address the extensive manipulation of the OPCW's probe into the alleged chemical attack in Douma. 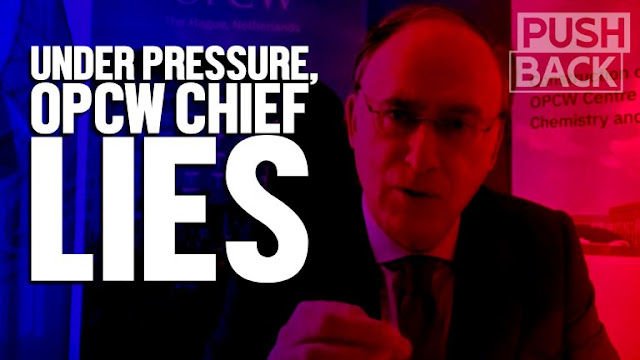 When it occurred in April 2018, the US, UK and France accused Syria of dropping chlorine gas cylinders that killed dozens, using staged white helmet, video footage with bodies moved and placed into certain positions for maximum effect.
The Axis of War immediately used this an excuse to bomb the war torn country, in supposed retaliation and to help the starving war torn survivors of ISIS rule, which Syria, Iran and Russia were doing a good job at clearing out of the country, until Biden sent troops in to re-occupy the parts containing oil, and their wheat supply.
Until now, no-one I know on the establishment side has explained why President Assad would carry out the one attack, that he knew, would cause the Axis to attack his own country after Obama stated his "red lines".
Plus people forget that when John Kerry was asked what Assad could do to stop any attack, he replied "Give up your chemical weapons". Almost the next day, Assad handed over all his chemical weapons to Russia to be destroyed. Obama administration deputy national security adviser Ben Rhodes, suggested that all of the Assad regime’s chemical weapons had been surrendered under the 2013 deal.
In a tweet he even said that the U.S. airstrikes launched against Syrian targets “could not have ended the violence in Syria or removed all of the chemical weapons, which were destroyed through diplomacy.”. Therefore it seems very illogical for Assad who did not want any US involvement in his countries fight against the CIA backed Jihadists and ISIS, would carry out the one crime that President Obama had publicly claimed would cross a red line for the US and force them to attack the country.
It is much more likely that a CIA backed jihadist group like Jaysh al-Islam, a Saudi-backed extremist militia, who were occupying Douma, a suburb of Damascus for years, carried out any attack, and then staged it so that it looked like the Syrians carried it out and were then blamed for it.
Ian Henderson, a 12-year veteran of the organization and weapons expert, had led on-the-ground inspections in Douma, and conducted a detailed engineering study of gas cylinders found at the scene.
He concluded that the cylinders were likely “manually placed” rather than being dropped by air. A finding that suggests the attack was staged on the ground by the Saudi backed militants who controlled Douma at the time. He stated in front of the UN that “We had serious misgivings that a chemical attack had occurred,” referring to the FFM team in Douma.
When news like this airs on par with the falsehoods and lies that led us to war in Iraq that killed and displaced millions and is just being ignored by the mainstream news, it has to make you think, what would it take for MSNBC, the BBC and CNN to actually report accurately on all the anti-establishment narratives and lies that abound, now that whole News Stations and their broadcasting is being  controlled by Intelligence agencies.
It is left to sites like The Grayzone and independent journalists like Aaron Mate and Abby Martin from Empire Files to tell the truth online without getting banned from the public speaking squares we have all come to know such as Facebook, Twitter and YouTube.
This video is from the UN as Aaron Mate debunks OPCW’s Syria lies and confronts US, UK on their cover-up.
This news is REAL news.
It does not deserve to be dismissed by fake news people like Rachel Maddow as irrelevant, now that Biden is President, any pro-war act he takes is okay by them.
Whether it is caused by lies just like Iraq and seemingly Syria, it does not matter to them, for real journalists to get the word out, they have to appear on right wing news channels and risk being smeared, blackmailed and labelled NAZI's by other left wing personalities, all due to them doing all they can, to actually speak the truth, and get important information and REAL NEWS out to as many people as possible.
Please tell me what you think about the Douma attacks.  Would Assad be stupid enough to carry out the one attack that would rain hell fire down on him from the Axis of War or was it staged by CIA and their paid for Saudi backed jihadists?
By Dark Politricks
© 2021 Dark Politricks
Posted by Dark Politricks at 18:49