In another reminder why we cannot trust anything a politician says, the Tory/Lib Dem government are to revise plans to snoop on all emails, social media and web site traffic that Labour abandoned after the government (then the opposition) kicked up a huge fuss about civil liberties.

Obviously GCHQ, ECHELON and all the other taps into the backbones and keylogger botnets controlled by the "government" allow them to do this already however any new law is just going to legalise the practise.

If you don't believe me just check out a few of these links.
And those are just a few of the articles I have linked to or written myself. There are literally hundreds more and each article contains links to other sites where more information can be found but the key point to remember is this - we are being watched and we are not paranoid because it's been admitted and it's true.

Take as many anti-psychotic pills the doctors want to prescribe/sell you but that won't stop the key fact that the days of our free internet are long over and just staying under the radar is getting harder and harder.

The best way not to be tracked by our global surveillance system is to go a live in an underground cave in the middle of nowhere, speak to no-one and do nothing involving a modern electronic device.

Pretty boring I admit but unfortunatley in this age it's the only think that will work.

Do you really think the old adage of "If you have nothing to fear you have nothing to hide" is really true when huge super computers the size of cities are being built in the USA to trawl like fisherman all internet traffic and then sift it for anything useful.

Do you really think that you won't have at least a few emails to Aunty Vira or Cousin Dave sifted through because you mentioned the word terrorist or Muslim?

As the now "pay to read" Sunday Times says today:


THE government is to expand hugely its powers to monitor email exchanges and website visits of every person in Britain.

Under plans expected to be announced in the Queen’s speech next month, internet companies will be told to install thousands of pieces of hardware to allow GCHQ, the government’s eavesdropping centre, to scrutinise “on demand” every phone call made, text message and email sent and website accessed in real time.

Under the current law, companies must keep records for some traditional types of phone and electronic communication for a year.

The new legislation would extend this provision to cover a much wider field, including social media sites such as Facebook and Twitter and online video games.

An effort by Labour to introduce a similar law was shelved in 2006 after fierce opposition from the Tories, Liberal Democrats and privacy campaigners.

I won't even pretend to be surprised anymore when I hear that our government brings out plans that they opposed in opposition and it only goes to show that anything Ed Miliband and co say at the moment should be taken with more than a large pinch of salt.

They will literally say anything to get your vote and once gained they treat it with disdain.

In fact it won't be long until the idea of National ID cards and "Real Online Personalities" are brought up by the once considered liberterian-ish Tory/LibDem coalition.

A bill that the Lib Dem's promised to bring into law once they gained power to roll back all the police state measures enacted by Labour's 13 years of CCTV, RIPA, Mega Databases, ID cards and unbalanced and unfair extradition treaties with the USA that have seen UK citizens in the dozen flown off to America to probably never be seen again without an orange jump suit on.

You can read the original Freedom bill here and it was a good bill.

A bill that was needed to restore our right to protest and our right to silence in the face of bent cops looking for  short cut.

However when the bill was actually published it was a cut down version with anything good removed and was heralded as nothing more than a bill to stop rouge wheel clampers from clamping your car.

Whatever happened when those Lib Dem's walked through the doors of power....

So d0n't hold out out too much hope of fairer taxes, banker bashing, or any of the actual Labour policies that are known at the moment as anything said over the next 3 years is just bullshit to trick you into voting for them.

Once they are in power they will forget them all and do whatever they are told from above.

Lets not forget MI5 spent a long time spying on Labour when it was a real party of opposition that offered real change and there is more than a good argument that Tony Blair was groomed by the agency to become their leader and turn it into the New Labour, third way, bland centrist party we now see before us.

Take away the choice - control the sheeple and still let them think they decide their own fate. 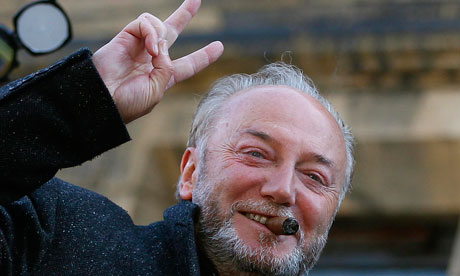 Therefore I am glad Gorgeous George Galloway recently won the "safe" Labout seat in Bradford the other night and for his Respect party.

With the war in Iran about to kick off, and talk of another 10 years of death and destruction in the Middle East about to start to "spread democracy", as we have so poorly done in Libya.

I am grateful there will be at least one member of Parliament that can give a good speech to attack the war mongering policies that will no doubt be put forward by our coalition government.

Good on you George!

I hope you give them hell in Westminster. I might not agree with everything you say or stand for but I defend your right to say it, and on the matter of Palestine v Israel and the illegal wars of terror there is no better orator than you when it comes to defending the Palestinians against the might of Israel and their US paymasters.

Hopefully you can help kick up a fuss about the new surveillance state the Tory / LibDem government is planning for us as well.
at 07:14
Email ThisBlogThis!Share to TwitterShare to FacebookShare to Pinterest
Labels: ECHELON, Emails, GCHQ, George Galloway, Internet Freedom, NSA, Police State, Privacy, Snoping, War on Terror