New Videos of Witness Testimony, Explosives and Conspiracy at WTC on 9.11

These are some very good videos which sceptics and believers of the official conspiracy story on 9/11 and what brought down the Twin Towers should watch.

Why? Well the videos contain numerous clips of TV footage from the day of the attacks which are hard to find nowadays.

This TV footage from mainstream channels shows numerous witnesses and TV commentators speaking of how they heard bombs and explosives go off. What is very illuminating is how on the day of the event even the mainstream media were willing to ask questions about explosives, controlled demolitions and drones / military planes being flown into the buildings. It's such a shame that they are all now towing the party line and keeping quiet about what they know happened that day.

From Fireman to Policeman, reporters and office workers there are numerous witnesses who on the day claim to have been in all parts of the WTC when they either saw, heard or were injured by explosions that happened BEFORE the Towers fell.

This includes the smashed up lobby which is seen on camera in which people died which the official story explains by claiming fire from the planes shot down the elevator from the impact site.

This is despite the fact that the elevators were hermetically sealed which would have prevented this from occurring. Also whilst people are seen on camera in the holes near the plane impact zones perfectly unharmed people were being killed, burned and thrown all over the place hundreds of floors away at the bottom of the towers.

There is also enough live video footage to rubbish claims that no loud bangs, explosions or cutter charge like sounds were heard on the day. Numerous clips will show you how loud the explosions were and how similar they were to demolition explosives as well as dozens of witnesses who talk about leaving the scene as "bombs are still in the building".

The videos also explain how easy it would be for a small team of people to plant enough explosives near the cores of the Twin Towers without:
By planting these high explosives on every second floor and using programmed timers it would be easy to demolish the central core of the WTC and stage what looked like a pancake collapse.

The Maths is pretty simple and the power outs in the days leading up to 9/11 would have provided these conspirators with enough time and cover to carry out their job without being spotted.

Not only were the bomb sniffing dogs pulled out of the towers before the attacks but CIA 9.11 whistleblower Susan Lindaur, who was one of the first people arrested under the PATRIOT Attack for trying to tell her story, explains how in the run up to the attacks vans and men carrying tools and equipment would visit the towers every night for days in a row between 3-5 am in the morning when no other staff were present.

The blackouts gave the cover that engineers needed to do work as well as enabling CCTV to be off at the time needed to plant the explosives. A small team could plant enough bombs to demolish both towers within 24 hours.


How they could have easily rigged the WTC Towers for demolition

The videos also show some clips I personally haven't seen until now including a shot of WTC-7 before it fell and what looks like cutter charges going off all across the building.

You can actually see small flashes of light dot from window to window from the right to left of the building and this would have been required for WTC-7 to fall into its own footprint the way it did.

No sporadic fires could have caused such an evenly and well-timed collapse including the 2+ seconds of freefall. Even the company NIST asked to carry out experiments to try and prove how the buildings fell could not replicate a collapse scenario which means NIST had to rely on computer models and unrealistic parameters to explain how a single point of failure caused what looks like a demolition sequence in WTC-7.

Just like the video of the collapse of WTC-7 which shows the Penthouse of the building dipping before the rest of the structure the same goes for the Twin Towers. You can see the highest points of the towers, the aerials and other equipment on top of the tower's core dip before the rest of the building starts to collapse. This all indicates that the central columns had been removed first.

For people who haven't seen the structure of WTC and think a plane and office fires could have demolished it's huge central core think again.

The way the building was built meant that even if the trusses and other supporting columns and beams were weakened by fire or a plane the central core would remain intact. The sides of the building may have toppled or slowly fallen off bit by bit but there is no way a fire could have caused the huge central core to be crushed and pulverized into dust as it was.

The explosive nature of the collapse was so intense that steel and other materials were melded together and fires burnt underground for ages during the clean up process.


Pictures of the WTC Twin Towers Design and Central Core 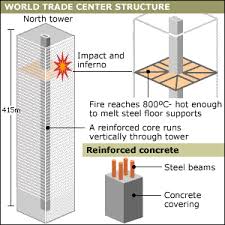 The videos also show clips of other buildings that were hit by debris from WTC, including buildings where huge steel girders were embedded into their walls after being shot out sideways from the collapse.

How a fire could have caused enough pressure to do this I don't know but these other buildings didn't catch fire and then have a free fall like collapse as WTC-7 did. Therefore it is very odd how WTC-7 acted in the way it did when many other buildings were hit by the falling debris from WTC.


What explosives were used to destroy the Twin Towers

The numerous interviews with witnesses and bystanders from the day also talk about the military looking planes that hit the buildings.

There are multiple witnesses who saw the planes and detail how they were grey or very dark, and didn't look anything like the red and blue American Airlines aircraft that supposedly hit the Twin Towers.

Remember that even back in the 60's certain people in the Military and US government (Operation Northwoods) thought it was a good idea to stage a false flag attack and blame it on Cuba by automatically flying planes, sending out fake distress calls saying they had been hijacked by Cubans and then crash the planes. All this so that the US public would believe Cuba was at fault therefore legitimizing a war of aggression against the island. If the US could plan a false flag attack like that back in the 60's then imagine what automated chaos they could instigate with modern technology.

In the following video CIA whistle-blower, Susan Lindaur, gives a speech where she explains the war with Iraq wasn't necessary and that before 9.11 Iraq was actually bending over backwards to help the USA. They even offered to provide the US Government with everything they wanted which negated any need for an armed conflict. She claims her back channel mission between the US and Iraq had provided a lucrative and unexpected bounty of gifts which has been kept secret from the US population.

This included:
She also talks about her reasons for believing that both hijacked planes AND explosives were used to bring down the Twin Towers, the planes being a cover story for the demolition job. It is well worth listening to the story of a 9.11 whistleblower who tried to tell her story to the US government and the people but was instead jailed for a year under the nefariously named PATRIOT ACT.

As I say in my article 9.11 Sceptics versus logic and reasoning, what we need is a full criminal investigation with subpoena power into the events of 9.11.

Although much of the physical evidence has been destroyed a lot hasn't and many witnesses and conspirators are still walking around freely.

Obama never brought the change the USA required after the criminal Bush administration therefore only a real concerted push by the people can bring around REAL change.

It's either that or you continue to stick your heads in the sand.

Know your place. Do NOT ask questions. Keep quiet and suffer in silence as the war on terror is used to justify a massive crack down on civil liberties and the building of a new high-tech police state. Be monitored 24/7 and treated like criminals at airports. Be sheep on a slow walk to the slaughter house.

Or you can stand up for what you know is wrong. Fight the lies we are constantly being fed by our Government and their bought off media whores. Ask questions and don't accept the official line. Do something worthwhile with your life whilst you still can.

Further reading on 9.11 from Dark Politricks:

9.11 Sceptics versus logic and reasoning

9.11 Remaining Questions and no answers

The 9/11 Passenger Paradox: What happened to Flight 93

Is The Pentagon Attack Finally Solved

View the original article A Video Compilation Of 9/11 Witness Testimony To Explosives Being Used At WTC-7 at darkpolitricks.com

View the original article A Video Compilation Of 9/11 Witness Testimony To Explosives Being Used At WTC-7 at darkpolitricks.com
Posted by Dark Politricks at 09:13