Why you should read MY ARTICLES on darkpolitricks.com

Why you should read MY ARTICLES on darkpolitricks.com #altnews

I found this article on some site when searching for backups of my own articles people had taken that hadn't been moved here from my old site. It's from 2018.

You should read my articles if you are interested in news that is:

-Anti Establishment
-Anti War / Peace e.g Not thinking a Russian is under your bed when you go to bed.
-Doesn’t support the Petrodollar and the US doing anything for Israel and Saudi Arabia because they probably cleared Fort Knox out decades ago.
-Free Health care for everybody – even in the richest country on earth e.g USA.
-A cut back on the US Empire by shutting at least half of their military bases around the world, ending the multi trillion dollar wars in Afghanistan, Iraq, Syria, Yemen, Somalia and all the other places we don’t realise they are fighting at the moment for the upkeep of the Petrodollar, the only thing that allows the US to print trillions of dollars they don't have any intention of paying back, and starting wars with any country that refuses to pay for there oil in US currency. 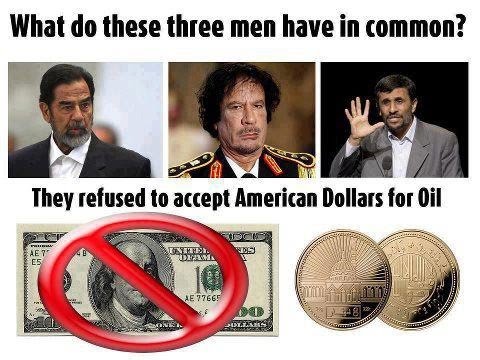 How many Navy SEALS and Army Rangers are probably stalking, raping and killing in Africa right now before blaming it on the local militias as false flags? Just as the Israeli’s did in Iraq. They dressed up as US soldiers then filmed themselves driving the roads just randomly shooting people to foment resentment and internal strife – plus guerrilla war against the USA before posting the film to YouTube.com.

-That Russia isn’t a utopia but we made a promise to them that we would not move NATO an inch forward towards it if they allowed the Berlin Wall to crumble and the Eastern Block to crack. Can you imagine the USA’s response if there were as many Russian bases surrounding the states as there are US bases around Russia/China.

-Education should be free for life for everybody. To retrain for the new economies and just to learn philosophy in your 50’s because you want to. You know that Stalin and many other dictators favourite philosopher was Plato and his book “the Republic” because Plato decided the only way to control society was to have a dictator who could get things done properly, but who didn’t want the job, and had enough philosophical knowledge to treat his people fairly and equally.

Shame that this link is always mentioned between dictators and Plato as we currently live in an Oligarchy of the rich 1% corporatist war machine, money fakers from Wall St who own Congress at the moment. A dictator may get decisions made and done quickly but the people need to put forward THEIR ideas for policies and have politicians come and get your vote.

–Ban lobbyists like the NRA and AIPAC and any group that has revolving door at Congress/Parliament (in any country) that pays off Senators and Congressman (oh and Obama with his half million dollar speeches in Wall St for weakening any regulations with the already piss poor Dodd Frank act) and then gives them jobs as lobbyists to make even more money.

If they are going to ban Redacted Tonight, an American based news show, presented by Americans on American issues just because it has links to the Russian state then they need to ban the BBC, AIPAC, Al-Jazeera and any other foreign “agents”, as they are being called.

–The emergency laws enacted after 9.11 that allowed the President to declare war without Congress’s permission is not over due for repeal but dangerous and anti-constitutional.

Only Congress can declare War. I suppose this is why we have so many “humanitarian emergencies to involve black hawk helicopters and missile launchers in’ protecting the people by dropping “The Mother Of All Bombs” on buildings killing US citizens.

-Having to put masking tape over your webcams and cover microphones, turning GPS off on your phone or even removing batteries (if even possible anymore) to stop triangulation pings, and having GCHQ and the NSA listen and watch you like George Orwell’s 1984 is not a ‘FREE SOCIETY’.

When George W Bush after 9.11 lied and said the terrorists did this because they hate us for our freedoms we just handed them all away. Laws such as the PATRIOT ACT, NDA, Authorization for Use of Military Force (AUMF), Torture, lack of Habeas Corpus, GITMO.

Plus Allowing kids brought up on computer games shooting people with missiles to work in Las Vegas and kill REAL people in Afghanistan then imprisoning/or killing whistle-blowers and journalists who reveal the truth about Prism, XKeyScore, DNC / Podesta emails that showed Democrat primary fraud.

Plus there are people who the US tried to extradite from the UK for almost a decade because they found before and after shots from NASA where alien ships had been removed from pictures before being handed out to universities such as Gary McKinnon .

That is an Oligarchy, power by the few.

A free county should have the politicians work for US not the other way round where institutional corporatism has seen Wall St, Silicon Valley and the MIC tell their puppets in Congress what to vote for. They don’t care about you, they care about getting a nice cushy job for doing favours for whatever department they are running in Washington/London/Paris after their political career.

Harry Truman said ‘No man can get rich in politics unless he’s a crook! It can’t be done.’ – just look at how many millionaire politicians are in positions of power at the moment e.g Nancy Pelosi.

–If Iran cannot have nukes nor can Israel. Israel is not even in the NPA and we know they gave US secrets to the Russian through the worst US traitor ever, Jonathan Pollard who was freed after 30 years as a bargaining chip to stop illegal Israeli settlements – how did that go. He got over 60 CIA double agents killed due to his info on NATO plans for a nuclear retaliation > https://www.theguardian.com/world/2015/nov/20/spy-jonathan-pollard-to-be-free-after-30-years-but-still-a-thorn-in-us-israeli-ties

-Talking about nukes, at least we now (or did), have a treaty with Iran, which Trump wants to screw up. It ensures excess radioactive material is sent to Russia to be destroyed and that they won’t go over a certain percentage needed to make nukes.

It is in the Koran not to make such a destructive weapon and Iran has said many time both the mullahs and politicians that they would never build or use one.

Iran never dropped missiles on Iraq in their 80’s war despite the CIA giving Saddam Hussein the position of Iranian troops knowing he would gas them, killing hundreds of innocent people on a passenger flight, then later telling him it was ok to invade Kuwait > http://www.darkpolitricks.com/p/transcript-of-meeting-between-saddam.html

When Saddam did invade Kuwait for slant drilling for oil e.g drilling at an angle to get oil from Iraq’s water rather than their own. The US turned on him like they do to all good US dictator allies when they are past their usefulness.

Iran NEVER dropped bombs on Baghdad or other Iraqi cities as they believed killing innocent people by their weapons was anti-Islamic.

Why is this never mentioned when talk of Iran wanting to wipe Israel off the map with nukes is discussed > http://www.darkpolitricks.com/p/did-irans-president-want-israel-wiped.html > and why is Israels’s “Samson Option” > https://www.youtube.com/watch?v=qF5px7PsWjw > destroying the world if threatened, taking the whole Bible story temple/or Eastern/Western capital countries with them if threatened with annihilation.

Tent cities in the richest country on earth due to Wall St kicking people out of their homes due to gambling their pension money. People going bankrupt or even dying because they cannot afford health insurance, kids with a trillion dollars worth of student debt and a country that basically runs on WAR is not a country with a light on the hill for others to look up to but the evil we need to fight before it kills us all.

When you finally wake up and realise we are not the good guys but the baddies then it may come as a shock to the system but facts are facts.

Here are just 3 books to read that might change your mind. If you have not woken up yet and they don’t even mention 9.11 and are all proven historical records.

Confessions of an Economic Hit Man – The shocking story of how America really took over the world.

Conspiracy the Secret History: In Search of the American Drug Lords – Barry and The Boys From Dallas To Mena – How the Iran/Contra scandal was all about using Mena Airport in Arkansas to fly guns down to the right wing rebels and coke back to Mena airport where the CIA used Ricky Freeway Ross (who made a $1 million a day) to sell thew new cheaper more addictive drug Crack in LA.

They always tipped him off giving him a head start on any police raid on his cooking houses that were always based next to freeways so he could get away fast.

Supposedly a photo is supposed to exist that Barry Seal (the pilot shot by the CIA not Colombians as the ‘official’ story goes) had a secret photo of both Jeb and George W Bush collecting their own stash of coke at Mena, as well as the famous photo of Pablo Escobar helping load the coke onto the plane that started Ronald Reagan’s ‘war on drugs’. All as he secretly gave Iran arms to pass to Hezbollah who had US hostages in Lebanon.

It is most likely the reason Clinton was given the President’s position due to Mena airport being in his state. When they investigated Barry’s body they found a phone number and it was the personal phone no of the Vice President and ex head of the CIA, conspirator of the assassination of JFK whose Dad, Prescott Bush, wanted the USA to join Germany and become a Nazi nation during WWII – George H Bush.

Oh and the journalist who broke the story in his series the Dark Alliance series was found dead, apparently by suicide with 2 gun shots in his head.

A lot of people connected with the Clinton’s have been found murdered or dead in very strange ways since they came on the scene and it seems to continue with the killing of Seth Rich who was in contact with WikiLeaks and used a USB stick to quickly transfer data from DNC computers. It just isn’t possible for a remote hacker say Russians to transfer that much data over the web at that transfer speed. It had to be an “inside job” so to speak, and he paid for it very quickly.

So that’s what I am about – come and join me, and if you can donate or visit advertisers then you will really help me out.

Posted by Dark Politricks at 14:14