Why is it that the citizens of the richest country in the world cannot have what most of the rest of the world has, and why the CIA feels the needs to destroy any socialist countries that prove that they can provide better health care and education than the great free USA. A country where 30,000 people are now living in tents in LA due to the lockdown policies of California, and their lost jobs, health care and homes. 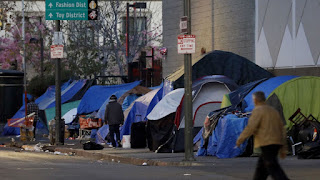 Remember the old quote from the ex President Harry Truman "Show me a man that gets rich by being a politician, and I'll show you a crook" and then look at your political leaders in the USA. How many of them are multi millionaires, and how many of them have made millions due to the COVID pandemic?
Nancy Pelosi was recently exposed as an insider dealer, as she bought millions of stock in products like Microsoft and Amazon that she knew would be granted billion dollar contracts with the DOD during the Biden term, plus all the other stock she bought that went up due to the COVID pandemic.
In 2014 it was found out that she was worth over $202 million since becoming a politician - how? I am sure Senators and Congressmen are not paid that well.
However she has been found to be making money from the pandemic and her husband who is a venture capitalist who always seems to make the right purchases ahead of time.
Hopefully you are sensible enough to know by know not to get your facts or news from the MSM, BBC, Facebook, Google, or Wikipedia. All companies and news outlets that have recently been found to be working with intelligence agencies, and the establishment to remove accounts that deviate from the established narrative. If you are still getting your news from these sources you really need a bat over your head and a quick read up on "manufacturing consent"  by Noam Chomsky.
So why is it that the richest country on earth. One that can print into existence $40+ trillion to pay for CARE bills and Stimulus bills that had more pork in them unrelated to their names that even Donald Trump said he wanted the measly $600 stimulus cheques from his bill to be raised to $2,000, and all the feminist studies for Pakistani Women and speed boats for Sri Lanka removed. Something Nancy Pelosi refused to do before the election as she thought it would make voters more likely to vote for him if they just got cheques with Trump's name on it.
Does it really matter who gives the suffering people of the US aid in their time of need? They have suffered for decades under Republicans and Democrats. They have watched as NAFTA meant all their well paid union jobs were sent overseas, and sat by as Bill Clinton turned the Democrats into Republicans, let Joe Biden introduce the horrible crime bill that locked up millions of poor coloured people for small drug offences, and even created the privatised prison labour system
As George W Bush stood in the smouldering rubble of the WTC and declared that the terrorists wanted to attack us because they hated our freedoms, no-one seemed to do a damn thing about it as he then took them all away from you anyway with the PATRIOT ACT (another Joe Biden hit), the NDDA, and the AUMF (Authorization to Use Military Force), plus of course the ancient act of Habeas corpus, signed by King John in 1215. It leaves American citizens with less liberties and freedoms than a 12th century English serf,
Then "Change" came with Obama. Except as usual, a new President from either party meant business as usual. Lobbyists controlled what he did, Wall St was bailed out as Main St was left to suffer and the only real change was the amount of killing he did. He really is the worst President of recent times.
Really he should be forced to give his Nobel peace prize back as it makes an insult of the whole process. A president who turned 2 wars into 7, locked up more whistle-blowers than all other Presidents combined, despite talking about giving them protection.
He also killed the first American overseas by drone without due process (and the collateral damage of kids and women), and even ran out of bombs when interfering in Syria. One of the 7 countries General Wesley Ward was told would be invaded after 9.11. Quote:

"I said, “Are we still going to war with Iraq?” And he said, “Oh, it’s worse than that.” He reached over on his desk. He picked up a piece of paper. And he said, “I just got this down from upstairs” -- meaning the Secretary of Defense’s office -- “today.” And he said, “This is a memo that describes how we’re going to take out seven countries in five years, starting with Iraq, and then Syria, Lebanon, Libya, Somalia, Sudan and, finishing off, Iran.” > https://genius.com/General-wesley-clark-seven-countries-in-five-years-annotated

So when you hear your state news either the BBC, or the now CIA controlled MSM in the US talk about humanitarian reasons for going to war, and "sudden uprisings" you should know that your country is willing to spend billions on that but that they refuse to spend a little less on killing people who don't know why they are being targeted and spending it on you. Small items with a cut of DOD spending that could easily afford:
I will leave it to Jimmy Dore to introduce any sheeple who this may be news to, to show clips of CIA agents talking frankly about over-throwing left wing countries, demonising socialist counties and fomenting coups like the one they did in in Belarus the other week.
They aim to control the media so that the weak minded who don't think for themselves or do their own research believe what they are told straight out of the mouths of paid CIA/MI6 news men and women.
Read up on Operation COINTELPRO and MOCKINGBIRD, even Wikipedia can't hide the FACTS that the CIA used illegal methods against their own people. These operations are supposedly stopped now by the CIA, but then they just change the name of the operation and carry on, just like MKULTRA.
Plus as they are now actually appearing on the US news shows as anchors and regular speakers there is little need to use spy craft to get their propaganda over to you. You are being listened to 24/7 by your phone and Alexa, and pushed propaganda that we are really the good guys by our news stations. Do you really believe all that?
As Jimmy says, "the CIA over throw a democratic regime before most people eat breakfast". It's a line, but it's also unfortunately true.
I have just been given this remake of the famous "IF" poem by Rudyard Kipling, it is aimed at our UK PM Boris Johnson, but really it could be aimed at any Western neo-liberal politician, especially those like Nancy Pelosi that make millions on the job. Once elected they totally forget about the people who put them in office and just look after no 1, enriching themselves at ever opportunity, the #FraudSquad included. Have a read.... 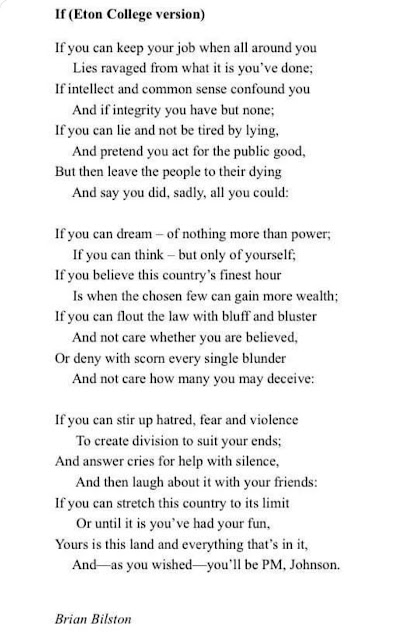