An interview with Gary McKinnon about UFO's, Free Energy and UK Law

An interview with Gary McKinnon about UFO's, Free Energy and UK Law

An old but interesting interview with Gary McKinnon the famous UK hacker who claims to have found evidence of aliens inside NASA computer systems. I bring this up because Julian Assange is fighting not to be sent to the US for a charge of "HACKING", when in fact he did no such thing and the US's informant recanted all his evidence in an interview with an Icelandic newspaper.
Gary McKinnon was also charged with hacking in the early 2000's and the US had waited until the new one sided extradition treaty with the UK had become law before charging him. However after public outcry and the knowledge that he had "Asperger's Syndrome", noticed by someone watching an interview with Gary on TV, led to a massive public backlash and even the Tory Home Secretary at the time decided to overrule any court decision saying, he would NOT survive in a US prison, a bit like how the judge in the Assange case said that he wouldn't survive in a US prison. If they cannot even keep high profile suspects like Jeffery Epstein alive under mysterious circumstances then what hope do people like Assange and McKinnon stand?
I hope the lawyers behind Assange bring this up in the US appeal, as at the time the US were labelling Gary as the most "dangerous hacker in the world". When in fact as you will see he did rather little hacking, and was just using the blank admin passwords on unsecure Navy computers to access them. So if we are not going to extradite the worlds most "dangerous" hacker, why should we be contemplating extraditing a non hacker, a journalist, which can be proven by the recanted evidence of the now locked up Sigurdur Ingi Thordarson.
The reason the US may have wanted Gary McKinnon so badly, despite him saving them millions in security audits by showing which servers needed real security if a port probing, blank admin accessing, total non hacker, as Gary freely admits he was, could get into their systems. Was that he found out about the secret space program, and lists off world fleet personnel, none that worked on Naval Ships in the US Navy. I think it had more to do with the fact he was telling the world he had found evidence of the US photo shopping out images of alien craft on the moon before making them public to libraries and universities than any "hacking" he may have done.
This is an older interview and not the original one I had due to it being taken down from YouTube - I wonder why? However it is good enough and comes from BitChute.com.
Within the interview he discusses:

As you can see the information about the server behind the IP address gives me quite a lot of information about the server type, the location of the machine and list of open or closed ports I could then use to try and enter that machine with other tools. Therefore the hack Gary did was very simple and many real hackers would not even consider this REAL Hacking at all. 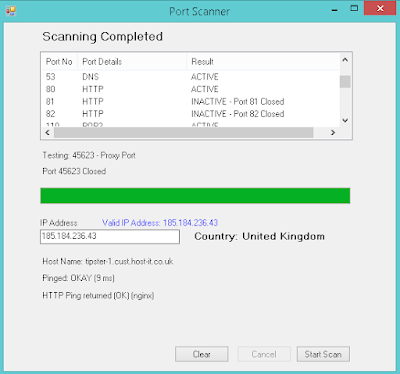 I did have an original interview with Gary in a pub garden where he spoke frankly about all the above issues but YouTube in their infinite wisdom has removed it so I have found the next best thing, an interview by Richard D Hall with Gary McKinnon from 2015 on Bitchute.com.
By Dark Politricks
© 2018 By Dark Politricks